Long before the time of the Reconquista, the Romans had a busy settlement at the Herdade do Pinheiro. The water was plentiful and the forest everywhere; many ovens were built to make daily wares as well as the amphorae (earthen jars) that would cross the Sado to the big factory in Troia where the “garum” and other specialties were prepared before being distributed all over the Roman Empire. The garum (salted fish brine) was the outstanding spice at the time, very much used everywhere. Pinheiro was a stop on the Roman road from Setúbal to Alcácer. The village kept growing over the years during their occupation. A few ovens where rediscovered during the 1970s, by a joint team of Portuguese and French archaeologists. Some were empty, others were filled with earthenwares and were rapidly vandalized.

During the middle ages, the property belonged to a military religious order called The Order of Santiago of which the Duke of Aveiro was the Grand Master. We don’t know how the land was managed during this period, but it seems that the Herdade do Pinheiro has had the same area since the 13th century. The monks, with their keen knowledge of agriculture worked the land with logic and rationality. The water lines on the estate all flow gently towards the Sado from the low hilly tops. In those days many people lived and worked on the property. In the winter, the river Sado would help provide food for all, when the returns from the harvests were getting low. Over the centuries the ownership of the property passed from the Order of  Santiago into the hands of the Aveiro family.

In the 18th century, the Duke of Aveiro was beheaded and most of his family’s properties went to the Crown. It was decided that a part of these estates would be, from then on, granted to the heir of the throne, the “Infante”. In 1879 several properties were put up for sale at an auction by the Casa do Infante, and the French born Edmond Bartissol bought the Herdade do Pinheiro. Now 5 generations later, the same family has the privilege of owning the estate. Through its 700 years of existence, the Herdade do Pinheiro has changed hands only four times. In our modern days, if the largest part of the estate is formed by agricultural land and forests, the major interest of the property lies in the continuous presence of water along its 8kms of coast line, the rich biodiversity and productivity of its wetlands. In addition to the very important estuarine ecosystem of the shore, several fresh water ponds, reed beds and temporary ponds are of great interest.

Life at the Monte

On the property and close to the Sado River, 14 kms away from a tar road, the Monte is now the home for over 60 people, some of them working on the farm and others calmly enjoying their retirement in a quiet village where they have spent their lives. Faithful to the traditional ways, Herdade allows the use of a house to all the employees who wish to live here. They each have their own vegetable gardens and chicken coops. The Monte is a community. The maintenance of all the houses is supported by the company. The employees pay no rent nor for the water needed for domestic purposes or watering the gardens. Life has not changed much and old time habits are very much alive. When the nights get warmer, some of the people of the village abandon their kitchen, gather around an open fire and grill what they have each brought for their own supper. Most of them are elderly ladies, with the traditional kerchief on their head, sitting down in a row, peacefully waiting for their turn, and gladly discussing the daily events whilst the meat is cooking. One year, unable to resist the wonderful smell, a fox came closer and closer, he accepted the meat thrown at him and got to be so familiar as to be hand fed. His mate never dared. Soon they were gone; the night was quite warm and the moon was shining inviting them to many other games…

In the days of mules and horse drawn carts, the stables were large and the village had over 250 inhabitants, the little school was full of children and the crèche was a busy place.  Now the mules are gone and most of the people have died or left the village; so has the doctor and the badly needed nurse. The grocery store also closed down. When it did, a young woman was hired who, twice a week, goes to the supermarket at Alcácer do Sal to do the shopping for the elderly people of the village. This is quite an expedition! Each person gives her a shopping list, which she carefully follows. One can imagine the surprise on the cashier’s face the first time she saw this customer going back and forth to a car with a bag of groceries rather similar to the one she had just bought; now all this is done easily, the supermarket opens a cash register just for her and has an attendant helping her with her purchases for about 40 people. A fish monger comes twice a week and other itinerant salesmen come by at the end of the month with varied wares.

From the many shadows of the past the Herdade Palacio was built. Overlooking the Sado, it was constructed whilst the Order of Santiago settled here at the time of the Reconquista in the 14th century. The Order had large properties that went from Setúbal to Alcácer do Sal. The Herdade do Pinheiro was one of them and the Order stayed here for many years. After being rebuilt many times over the years, the Palacio is now ready for conferences and business meetings. 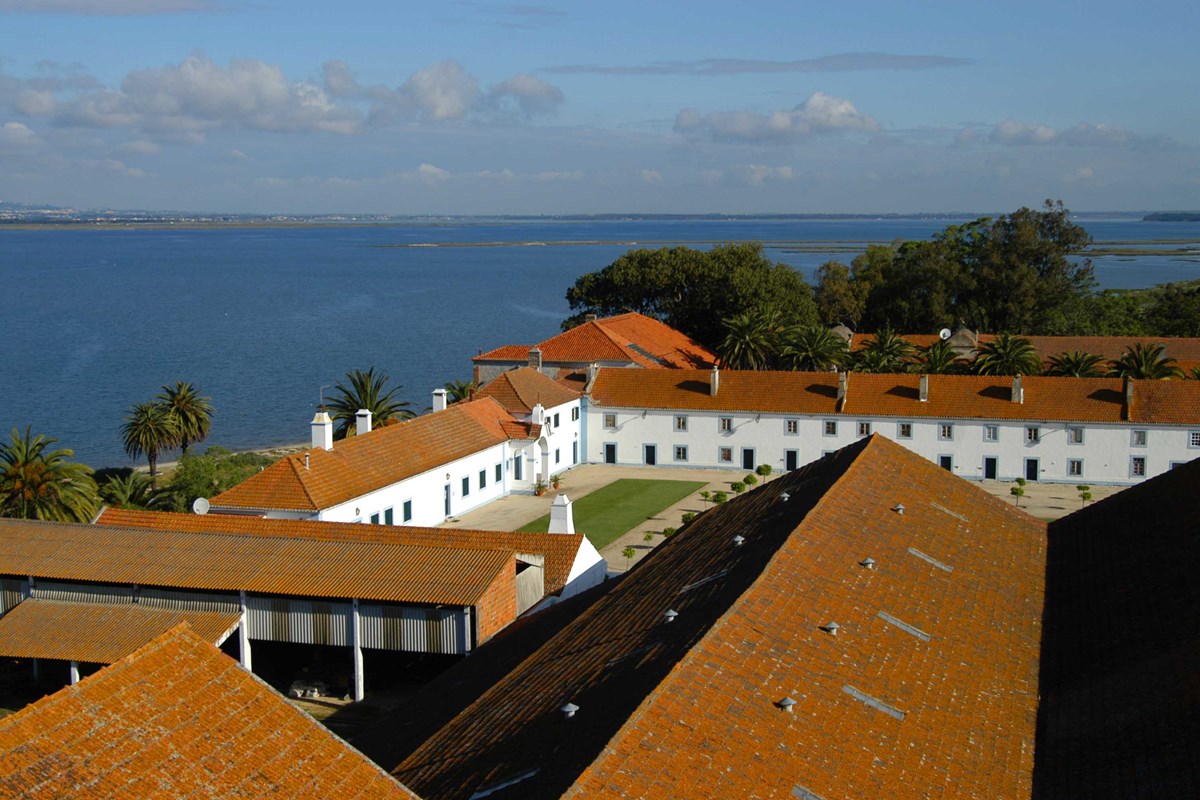